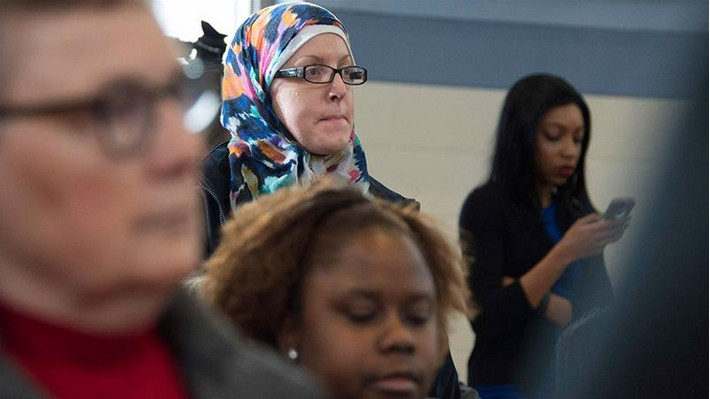 Four years ago, Mohamed Ali, a volunteer with the Bernie Sanders campaign, said it was hard getting those in his community to take part in caucuses in the US state of Iowa.

"They just didn't have the confidence" or they felt uncomfortable, Ali, who is a Palestinian-American real estate agent in the Des Moines area, told Al Jazeera by phone. Others, he said, didn't want to be involved in politics for fear of being targeted or discriminated against.

But this year participation of the Arab-Muslim community "has been huge ... it's been really amazing", he said.

According to Ali, that's in large part due to the five mosques that are hosting caucuses on Monday evening - the first time Islamic centres will serve as sites for the party gatherings where Iowans openly discuss and choose their preferred Democratic candidate in the US 2020 presidential election.

The mosques are joining more than 80 other locations around the world to act as a "satellite sites", which were established this year to be more accessible and inclusive of all Iowans.

"Our goal has remained steadfast throughout this process - to make these caucuses the most accessible in our party's history, and the satellite caucuses do just that," said Iowa Democratic Party (IDP) Chair Troy Price in a statement announcing the new satellite sites.

There are still more than 1,600 traditional precinct sites across the state but anyone can attend a caucus at one of the satellite sites, the IDP said.

For the Muslim community in Iowa, that means "having a safe place that is inclusive and is not going to give them any friction in the process", said Rummi Khan, co-chair of the Muslim Caucus of America.

Democratic organisers are expecting a high voter turnout for Monday's caucuses, with some predicting the night may break the previous participation record when nearly 240,000 people caucused in 2008.

Muslims make up about 1 percent of Iowa's 3.1 million residents, according to Pew Research Center. But the community could prove to be vital for candidates in a race won in the past by extremely close margins.

Former Vice President Joe Biden and Senator Bernie Sanders are neck-and-neck, according to recent polling. Former South Bend, Indiana, Mayor Pete Buttigieg and Senators Elizabeth Warren and Amy Klobuchar rounded out the top five. But the most influential poll, traditionally released just days before the caucuses, was scrapped after candidates were left off some of the questions.

Regardless, Khan said many Muslims across the state are "feeling very motivated to make sure that they're participating this round".

'If we don't tell our story, no one will'

Their participation comes at a time of heightened discrimination and Islamophobia across the US.

According to the Institute for Social Policy and Understanding's (ISPU) annual Islamophobia index, Islamophobia is on the rise in the US.

The number of anti-Muslim hate crimes and bias incidents surged after US President Donald Trump took office in 2017. The Council on American-Islamic Relations attributed the spike to Trump's travel ban, which targets nationals from several Muslim-majority countries, his frequent anti-Muslim comments, and other policies targeting Muslims.

On Friday, he announced an expanded ban, adding six additional countries - most of which were Muslim-majority or had significant Muslim populations.

Those policies have, in turn, spurred increased political engagement by Muslims across the US. According to Emgage, a US-based organisation dedicated to increasing civic participation, Muslim Americans turned out for the 2018 midterm elections in historic numbers.

While Abdul-Samad said rising Islamophobia kept many within Iowa's Muslim community from participating in the past, the success of Tlaib, Omar and others motivated many to get involved this election season.

"I think, now, that Muslims are coming out because we are now realising that if we don't tell our story, nobody else will," said Abdul-Samad, who is also the longest-serving African American legislator in the state.

Abdul-Samad said that, although many candidates never saw Muslim communities as a "viable entity that candidates wanted to go after", there has been a shift in recent years and candidates actively sought his endorsement, both as a Muslim community leader and an African American. He ultimately endorsed Sanders.

There is apprehension. Yes, there is some fear for having four more years of our current administration. But they're actually seeking to  come out of their houses and do something.

Elvir Klempic, a Democratic party activist who will serve as the Biden precinct captain at the Islamic and Education Center Ezan, agreed that more and more candidates are focusing on engaging with the Muslim American community.

"The caucus has gone to the community verses the community finding the caucus site," prompting more candidates to engage with the community, Klempic said, adding that Muslim ban, immigration, healthcare and foreign affairs topped the minds of many of the 15,000 Muslims in the Des Moines's Bosnian community.

That energy, combined with the establishment of the satellites sites, is helping motivate those within the Muslim community to actively participate in this year's election, the Muslim Caucus of America's Khan said.

"There is excitement," he said.

"There is apprehension. Yes, there is some fear for having four more years of our current administration," he added. "But they're actually seeking to come out of their houses and do something."