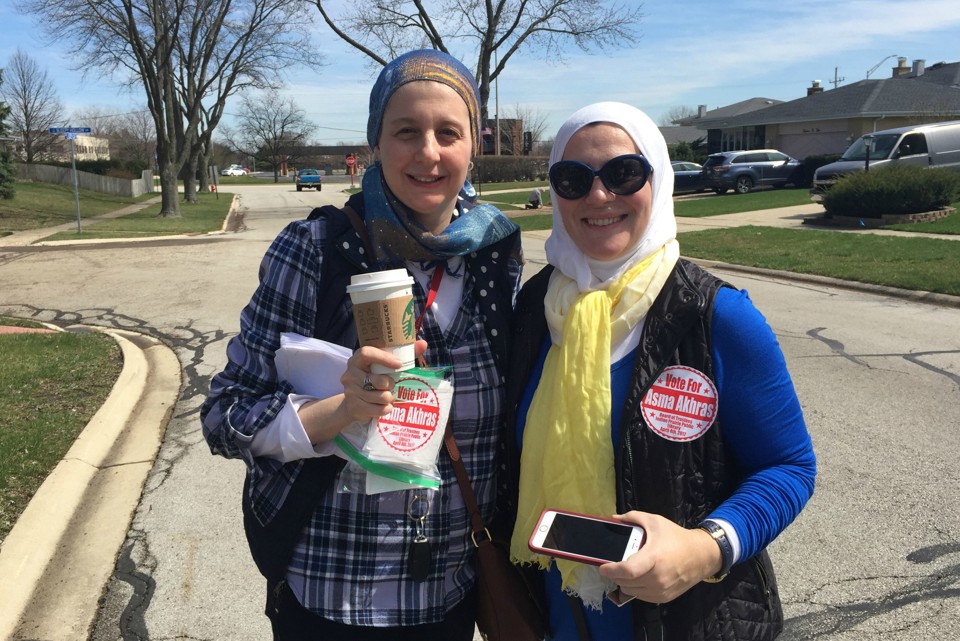 CHICAGO—A weary Barack Obama stood before the nation in January and delivered a message. “If you’re disappointed by your elected officials,” he said in his farewell address, “grab a clipboard, get some signatures, and run for office yourself.”

Mehrunisa Qayyum took the call to action personally. “I’m tired of being disappointed with my local officials,” the 30-something told me. When the local Democratic Party asked her to make a bid for Downers Grove Township trustee—“city council for the suburbs,” she explained—she decided to try running for office for the first time.

Qayyum is a progressive post-election fantasy come true. She’s a Muslim woman who’s getting civically involved in a purple district: In 2016, Downers Grove went 52 to 42 percent for Hillary Clinton, but 49 to 46 percent for Mark Kirk, the Republican U.S. senator who tried and failed to hold his seat against a challenge from Tammy Duckworth, a Democrat.

Qayyum isn’t alone. Reema Ahmad, a political consultant and organizer who works with the Muslim community, counted some three dozen Muslims running for local office in the Chicago area on April 4, when municipal elections were held. Motivated in part by the election of a president who campaigned on banning foreign Muslims from entering the country, some American Muslims are seeking a voice in politics—not just as voters, but as candidates.

“Civic engagement is my bread and butter,” Ahmad said. “I’ve not seen this before.”

Some Muslims have been involved in Chicago politics for a long time, especially those who are African American, according to Ahmad. The difference this year, she said, is that regular people who haven’t previously been politically engaged have decided to run.

“Ten years ago, if you had a Muslim who wanted to run, it was usually a wealthier person … [with] some type of professional degree who says, ‘I’m going to run for Congress!’” she said. “It’s been exciting to see people … recognize that it’s at the local level that you really are creating policies that impact our day-to-day lives.”

Qayyum and others like her are trying to find their role in this political moment, when Muslims are a constant topic of national discussion. But they’re also discovering something else: Local politics are hard. As Obama said in January, “Sometimes you’ll win, sometimes you’ll lose … And there will be times when the process will disappoint you.” A new class of leaders who are younger and more ethnically and religiously diverse may be stepping up to run for office. Taking back the government, however, isn’t as easy as it may sound.

Technically, Asma Akhras’s April 4 race for Indian Prairie Library trustee was uncontested. But she tried to keep that relatively quiet. The 42-year-old sees this election as a practice round for Muslims in her community, many of whom haven’t been that politically engaged, she said. “I want people to go vote!”

“Trump’s election has exponentially reaffirmed the need to be civically engaged.”

On a sunny Saturday afternoon before the election, Akhras set out with her cousin Suzanne to knock on doors in an orderly neighborhood with perfectly square green lawns in their hometown of Darien, about 30 minutes from Chicago. A relative agreed to print big, red campaign stickers for Akhras for free, and she was handing them out to raise her profile in the community. The library election may be her first, but she’s hoping to run for bigger positions in the future.

Canvassing can often be boring and tedious—say your name, talk about your candidacy, hand people a sticker before they shut the door—but for Akhras, it also feels freighted because she’s visibly Muslim. Other than the bright blue scarf she wore twirled in a knot at the nape of her neck, she might be any other suburban mom: She wore Chucks and jeans and a vest, and speaks with a Midwestern lilt. Like 89 percent of Downers Grove, the broader township where Akhras lives, she looks white; her Syrian heritage left her with fair skin.

But the hijab seems to short-circuit people’s brains, Akhras said. She works with teachers all over her area, yet a police officer once insisted on escorting her as she walked through a school. She has served on a local volunteer foundation board for years, and some of her fellow board members still can’t remember how to pronounce her name. Recently, she was screamed at by a lady in Walgreen’s. Ostensibly, the conflict was about Akhras’s parking job, but Akhras thought the woman’s aggression was really about her scarf.

It’s all little stuff that may or may not be clearly connected to her Muslim identity, but those incidents create a lens for reading every encounter. At one house we visited, an angry elderly man pointed at a sign on his door saying “No solicitations” and raised his voice. “I didn’t want you to talk to me!” he said. “Can you read that?” Safely away from the stoop, Akhras turned to me. “That’s exactly the point,” she said. “Because of my scarf … [it’s] like we don’t read, or are not educated.”

Akhras has wanted to try running for half a decade, but when her youngest child got cancer, that became impossible. This year, with her daughter’s illness under control and a high-stakes national election playing out, she felt like it was time. “Trump’s election has exponentially reaffirmed the need to be civically engaged,” she said. “This is my way in my little neighborhood.”

“I think there’s a political awakening in our country. I’m one of those people.”

Running for library trustee is complicated. Akhras gathered signatures to get her name on the ballot while canvassing for the Duckworth senatorial campaign this fall, but stopped at 50, the minimum number. A couple of days before she had to turn in her candidate form, she met with political organizers who told her she needed more in case any names were contested. She trudged through a snowstorm that weekend to get another two dozen, rushing to the municipal office early the next week to make sure her name appeared first on the ballot.

The logistical challenges of running for office are much greater if the race is actually competitive. Anisha Ismail Patel, a 43-year-old who lives 45 minutes north of Akhras in the suburb of Arlington Heights, owns an education consultancy, but she set her projects aside when she decided to run for school board. Patel started out as a one-woman campaign, but over time, she built up a 50-person volunteer staff, including Lillian, an intern on a post-high-school gap year, and Samara, her 11-year-old daughter.

This fall, the Chicago Tribune published a letter to the editor from Samara, endorsing her mother. “I … am certain that she is an amazing educator,” Samara wrote. “She has been a teacher for elementary and middle school, made teacher-training materials, been a part-time assistant principal, and has even taught basketball!”

“When I first started, I said, ‘No matter what, I want to get to know my community, and different organizations, and be active in my community,’” Patel told me as we wandered through the streets of Arlington Heights, filled with moms schmoozing and kids running around whacking stuff—a standard picturesque suburb. “Now my goal is not only to win, but to win by a high number.”

Every day since early February, she said, she has hit up voter-heavy spots like retirement homes, Parent Teacher Association meetings, and after-school carpool lines. “It’s a lot of time,” Patel said. “You also need financial backing. If you have a full-time job, I’m not sure how you do this.”

People have mostly been friendly, Patel said. One dad stood in his driveway with her for five or 10 minutes, asking about her campaign platform. Patel ticked off her promises—more transparency, better options for full- and half-day kindergarten, fiscal responsibility—stumbling only slightly as she ran through the bullet list in her head. Her religious and ethnic identity don’t change things much, she said. Unlike Akhras, she doesn’t wear a hijab. “I may not face Islamophobia as much because I’m not identifiably Muslim,” she said.

In recent years, Patel said, she’s been in “mom mode”—her 4-year-old “little guy” just started pre-school—and she didn’t know much about local government. Trump’s election made her want to get involved. “I think there’s a political awakening in our country,” she said. “I’m one of those people.”

On election day, Patel won big, at least by municipal-election standards: She got 20 percent of her district’s vote, according to initial tallies. Local races typically get dismal turnout, but she had been hoping that anger about Trump would bring a boost. Unofficial counts say 4,671 ballots were cast—a low-teens percentage of the district’s registered voters, similar to levels for these elections in previous years.

“People are finally coming around to this idea of running for office, not just complaining.”

Despite her victory, Patel still had headaches to resolve. Three of her four kids attend schools in District 25, where she ran, but her house appeared to be one of a handful on her block technically zoned for another district, possibly due to a mapping error. It took several days of back-and-forth with Cook County for the issue to be resolved.

Meanwhile, Qayyum’s run wasn’t so successful: She placed last in a six-way race for Downers Grove Township trustee. The four Republicans on the ballot won, while the two Democrats, including Qayyum, trailed distantly. “It’s kind of like part two of the November election. I’m trying not to take it personally,” she told me. She still thinks running was worth it: “This was the first time in many years that Republicans were scrambling at the last minute to put up their signs and take ours down,” she said.

Like Akhras, who won her uncontested race, she also saw this election as training for Muslims in the area. “A lot of my community, they didn’t know about early voting and mailing [ballots],” she said. “We talked about this being a dry run for the mid-term election. If we find a candidate we really like, regardless of whether he or she is Muslim, now we know how to mobilize.”

The local-politics revolution Democrats were hoping to see from their side after the election hasn’t necessarily happened yet. If suburban Chicago’s municipal elections are any indication, people often vote for their party down the ticket, local officials still labor in relative obscurity, and most folks don’t bother showing up on election day. But new candidates may step up to bear the tedium.

“People are finally coming around to this idea of running for office,” Ahmad said, “not just complaining.”