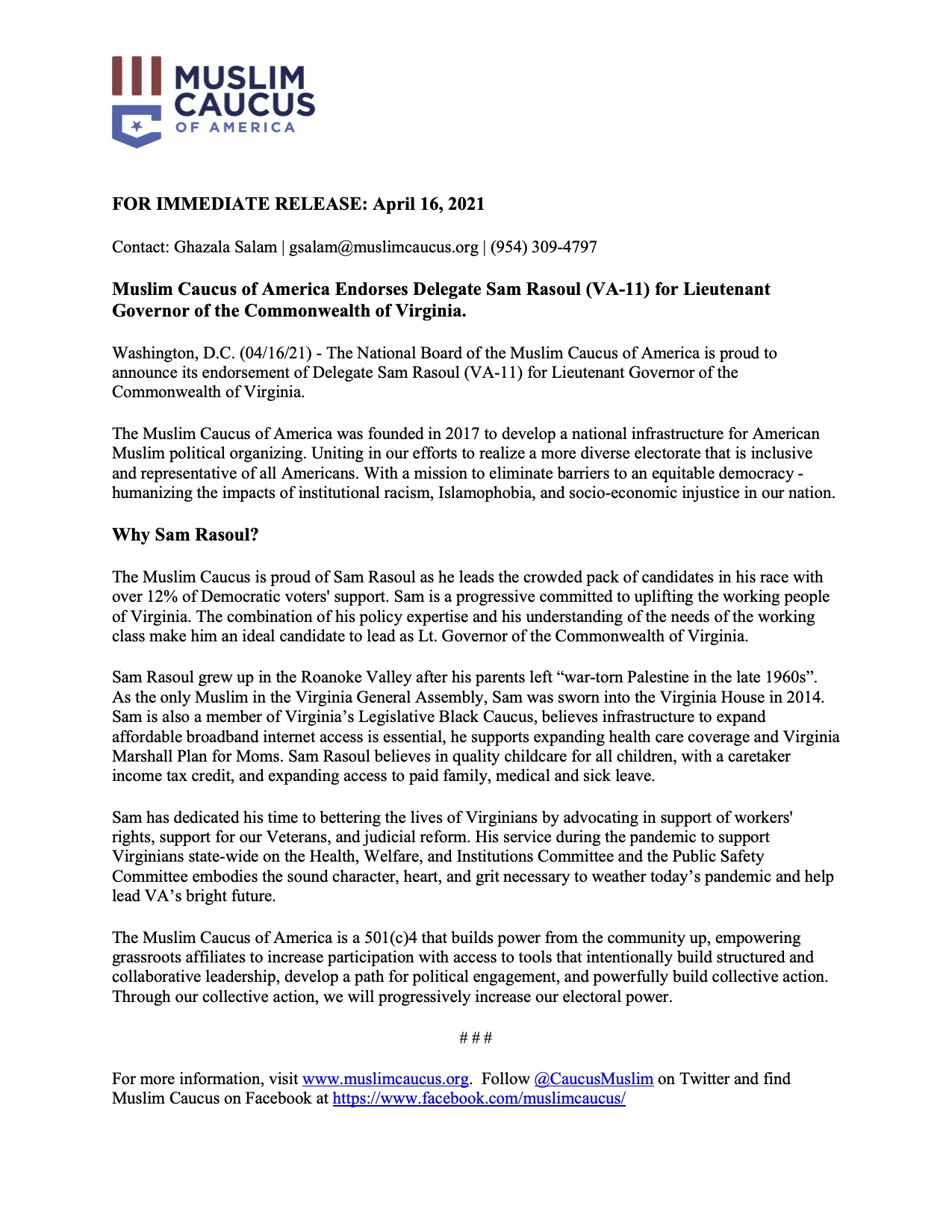 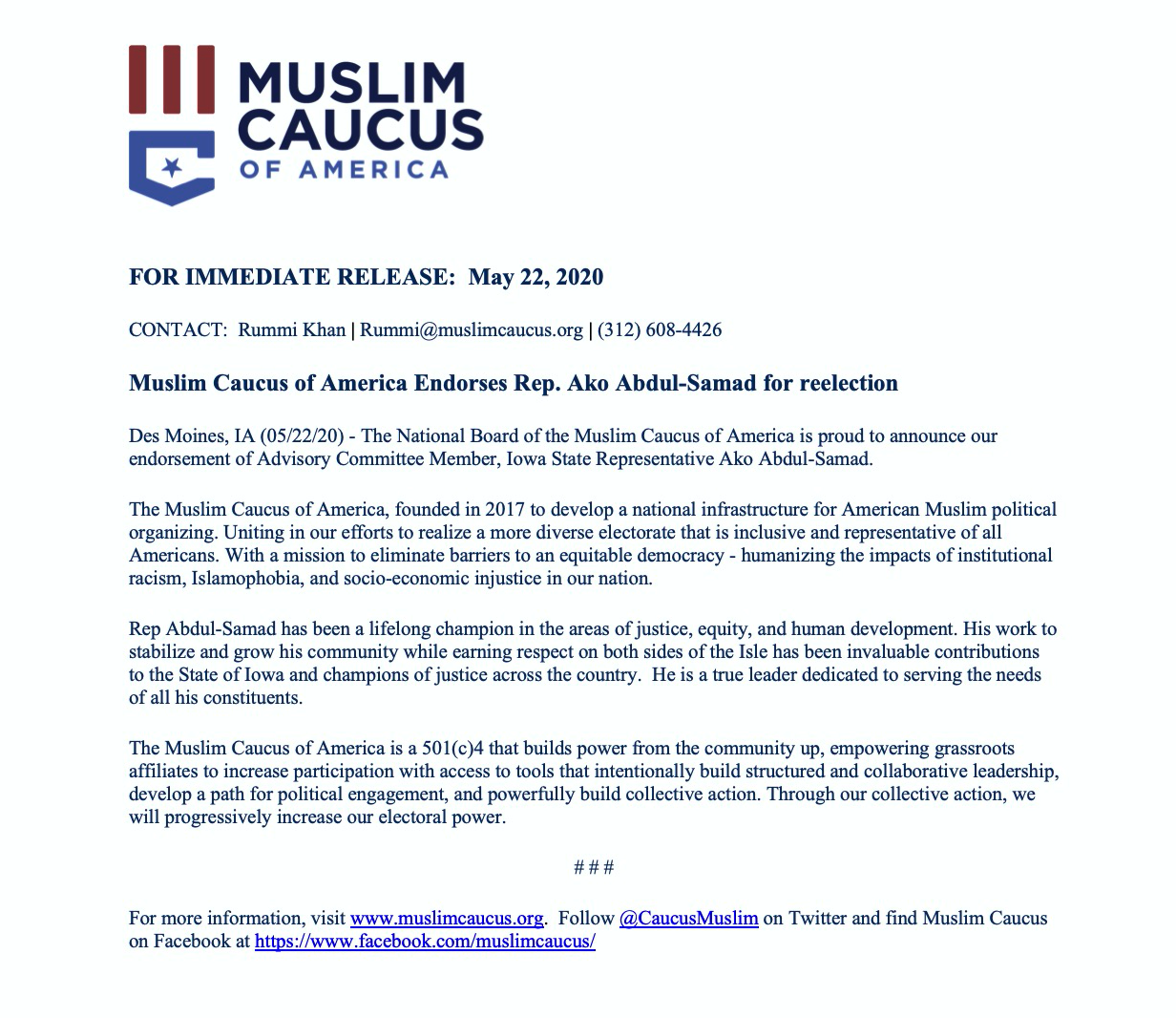 Des Moines, Iowa (1/31/20) - The National Board of the Muslim Caucus of America together with our Advisory Committee Member, Iowa State Representative AKO Abdul Samad, is proud to announce its endorsement of Senator Bernie Sanders for President of the United States of America.

The Muslim Caucus of America was founded in 2017 to develop a national infrastructure for American Muslim political organizing. Uniting in our efforts to realize a more diverse electorate that is inclusive and representative of all Americans. With a mission to eliminate barriers to an equitable democracy - humanizing the impacts of institutional racism, Islamophobia, and socio-economic injustice in our nation.

“American Muslims were disappointed with the hate and fear-mongering rhetoric of 2016 with Donald Trump tying Muslims to Terrorism and Bill Clinton’s remarks calling for a loyalty test of Muslim Americans to prove we were not tied to terrorism,” said Ghazala Salam, President of the Muslim Caucus “It’s been refreshing to see many of the 2020 Presidential hopefuls engage with the American Muslim constituency in an inclusive manner and not as an afterthought”.

While we appreciate the commitments, vision, and platform of all Democratic Presidential candidates, our endorsement of Senator Sanders is an affirmation of his holistic vision for the future with a commitment to building a cross-class, multi-racial movement for a truly equitable democracy.

For decades, Senator Sanders has been consistent in fighting for progressive policies and has demonstrated in word and in action the need to care for all Americans regardless of race, creed, or class. His passion has ignited a whole generation committed to disrupting corruption, inequality, and all forms of racial injustice.

Senator Sanders has displayed moral courage in fighting for the oppressed throughout his career, from his days as a civil rights activist to the countless pickets and strikes. He has stood with the marginalized people everywhere including Palestine, Kashmir, Bosnia, the Uyghurs, and Standing Rock. We agree with Senator Sanders in putting an end to endless wars and stop giving terrorists at home and aboard exactly what they want. We affirm foreign policy that focuses on core U.S. interests, clarifies our commitment to democratic values, and privileges diplomacy and working collectively with allies to address shared security concerns.

We believe that Senator Sanders is the best candidate to lead the much-needed political revolution to put American values back on track and American leadership back on the globe.

We also recognize Senator Warren and her policies on eradicating corruption and fighting for transformative, structural reforms to our democracy that would put power back into the hands of Americans - ranking her second on our nomination scale.

All of the 2020 Democratic candidates for president have demonstrated a commitment to eliminating inequality and advancing economic justice and civil rights. We thank and appreciate:

We know that the stakes have never been higher, and we believe that Senator Sanders will win the nomination to defeat Trump in November. But if the country moves to nominate another Democrat, the Muslim Caucus will not be sitting by the sidelines, we will do all we can to rally our support behind the nominee and defeat Donald Trump.

If there was ever a moment for you to get involved, it is now!

Join us in organizing for Bernie in every district, every county, and every state: Connect with our movement to mobilize for Bernie.

The Muslim Caucus of America is a 501(c)4 that builds power from the community up, empowering grassroots affiliates to increase participation with access to tools that intentionally build structured and collaborative leadership, develop a path for political engagement, and powerfully build collective action. Through our collective action, we will progressively increase our electoral power.