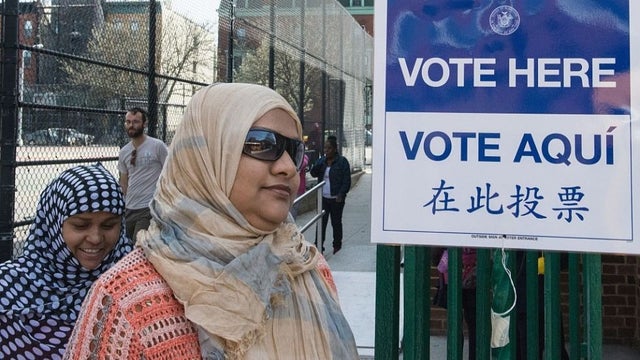 In this next presidential campaign, let's include Muslim voters

President Trump just kicked off his re-election campaign in Orlando and the Democratic candidates are preparing for their first debates this week. The 2020 presidential election is kicking into high gear and immigration issues will once against be at the forefront of our national political discussion.

The first Democratic debate falls on a crucial anniversary marking one year since the Supreme Court upheld President Trump’s travel ban from predominantly Muslim countries. Trump made this ban a marquee policy proposal of his campaign and tried three times to enact it as president. In a widely criticized 5-4 decision, the conservative majority on the Supreme Court backed him up.

Democratic candidates have a powerful opportunity to speak about their own policies and plans that will protect our democracy and the rights and liberties of Muslim Americans during the debate. For his part, President Trump has an opportunity to redefine his approach to the Muslim American community.

Outlining concrete plans to tackle what most of us consider to be the “Muslim ban” is crucial in engaging Muslim voters. Although Muslim Americans are a minority, we have become an increasingly important constituency, especially with Trump’s presidency. With the growing threat of Islamophobia and the travel ban, Muslim Americans turned out to vote in unprecedented numbers during the 2018 midterms

Muslims also have played a key role in swinging elections. While 80 percent of Muslim voters voted Democrat in 2018, 17 percent voted as Republicans. But if we go back to the not-so-distance past, Muslim American votes were more up for grabs. In the 2000 presidential election, Muslim voters in Florida helped George W. Bush win the election, which was decided by a mere 537 votes. Presidential candidates from both sides need to recognize the important political role of Muslim Americans and consider their needs in their plans.

U.S. politicians on both sides of the aisle have made crucial mistakes when talking to Muslim voters. The biggest problem is viewing us as a monolith.

In reality, the Muslim vote varies drastically. Muslim Americans come from over 90 countries across seven continents, including African American Muslims who make up the second largest demographic of Muslims in America. While Muslim Americans are united by their faith and some core priorities, the vast majority of Muslim voters are incredibly diverse with a wide range of socioeconomic and racial backgrounds, voting priorities and political alignments.

Systemic homogenization of people based on race, religion, ethnicity and socio-economic backgrounds has created a danger of phobia in our nation’s political and civic discourse. Because of homogenization based on race and religion, the stereotypes originally constructed for the 9/11 terrorists extend to all Muslim Americans, even to congressional representatives such as Rep. Ilhan Omar (D-Minn.). Muslim Americans continue to be caught in the crosshairs of the racialized assaults of the media and politicians. Rather than perpetuating Islamophobia, presidential candidates need to recognize Muslim Americans as an essential part of American society and recognize their importance in the political sphere.

While the issue of the unconstitutional travel ban is on the minds of millions of Muslims this election, Muslim voters also have several other core priorities such as mending the wealth and income gap, accessing affordable health care and education, and racial justice, women’s health, and having an equitable democracy. Candidates need to engage Muslim voters not only by talking about plans to reverse the travel ban, but also by discussing improved access to affordable health care, education, housing, economic opportunities and civil rights.

At this pivotal moment, Muslim voters are building power grounded in political education, community self-determination, civic participation, and state-level organizing en masse. Equitable democracy can work only when citizens are informed, engaged in voting and equipped with the skills of advocacy, debate, compromise and leadership.

The Muslim Collective for Equitable Democracy is a project that is leading change with grassroots engagement that is grounded in ordinary Muslim peoples’ lives and communities to advance their political power — representative democracy works when citizens are well informed not only about seeking policy changes but about ideas and cultural values — especially critical in target areas where Islamophobia is on the rise.

This election, the Muslim Caucus of America is mobilizing millions of Muslim voters to drive participation and strengthen our democracy. We’re planning a presidential forum in July in Washington, D.C., as we come together to create the space, support and relationships to develop a path to power beyond 2020.

It’s time for Muslim American voters to use the tools of democracy — not just at the ballot box, but also the media, public forums and social networks — to make sure our voices are heard and heeded.

Ghazala Salam is president of the Muslim Caucus of America, which she founded in 2017. A political activist and philanthropist, she is the executive director of American Muslim Health Professionals in Fort Lauderdale, Fla. Follow her on Twitter @gsalam1.